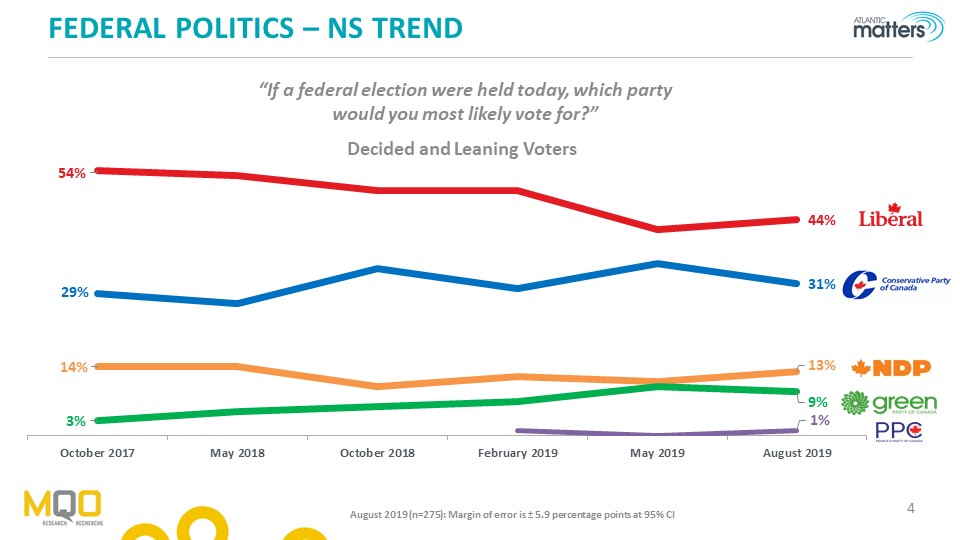 The federal Liberals lead the Conservatives by 13 points in Nova Scotia. While that margin seems high, our research suggests there are two important races happening in the province. There is one race in HRM and there is another outside of Halifax.

In this post, we’ll look at those races and point out things to keep an eye on in Nova Scotia during the campaign.

Halifax and Everywhere Else

Before the blackface controversy, the Liberals held a 22-point lead over the Conservatives in HRM. That points to it being a very safe place for the Liberals. This strength is helped by the relative weakness of the NDP and Greens in HRM. In our last poll, the NDP sat at 16 percent and the Greens at 10 percent in HRM.

Everywhere else in Nova Scotia, the race was statistically tied. Given the number of open seats, seats without an incumbent, that could cause problems for the Liberals on mainland Nova Scotia and Cape Breton Island. Given these numbers, no first time Liberal candidate should assume their seat is safe or their victory assured.

Here are the ridings and current MPs in HRM and their margin of victory during the 2015 federal campaign:

The two tightest races in HRM were Halifax and Sackville, both previously held by the NDP. Megan Leslie and Peter Stoffer’s losses were major upsets in 2015. Given their level of support in the last Atlantic Matters poll, it doesn’t seem likely that the NDP will retake these seats.

Things really start to get interesting when we get outside of HRM.

Here are the ridings outside of HRM. An open riding is a riding where the incumbent decided to not reoffer.

As we can see, there are five open ridings throughout mainland Nova Scotia and Cape Breton. The Conservatives also landed a high-profile candidate in country music singer George Canyon to run against Sean Fraser in Central Nova.

Outside of HRM, Nova Scotia could produce several headaches for the Liberals. As I wrote above, outside of Halifax the Liberals and Conservatives were statistically tied. That means the margins above won’t be repeated. It also means the races should be substantially closer than in 2015.

The Conservatives poached a former Progressive Conservative MLA in Alfie MacLeod. MacLeod was first elected to the Nova Scotia legislature in 2006. He won re-election in 2009, 2013, and 2017. He also served as the legislature’s speaker starting in 2007. He is high profile, but the federal riding has a long history of electing Liberals and the provincial seats contained within the riding are split between Liberals and Tories.

The Conservative Party enticed former Progressive Conservative MLA Eddie Orrell to run for them here. Orrell was first elected in a by-election and then re-elected twice, even during the 2013 provincial Liberal wave. Unlike Cape Breton – Canso, this area is almost purely Tory at the provincial level. Also, former PC cabinet minister Cecil Clarke nearly defeated former MP Mark Eyking in 2011.

This seat is up for grabs and Orrell could turn this long-time red seat Conservative blue.

The Conservatives lost in this riding only twice since 1968. Both times it was the Liberals who won – once in 1993 and again in 2015. Sean Fraser is a local candidate, but he is up against a candidate with a lot of name recognition in George Canyon. Will Fraser be able to repeat his 2015 upset and make recent political history or will Canyon prevail?

This seat is up for grabs.

This seat will be a fun one to watch. Former NDP MLA Lenore Zann changed parties to run for the Trudeau Liberals. She will likely receive help from former Liberal MP Bill Casey (formerly a federal Conservative).

Zann’s political career showed her to be a fighter and survivor. She was elected on the NDP wave in 2009 and held on through two Liberal governments. She will go head-to-head with Scott Armstrong. He held the riding from 2009 to 2015. The big question: Is Zann well-known and liked enough outside her former provincial constituency to win this riding?

There are too many odd inputs in this riding, and it will create an interesting dynamic. It will be up for grabs.

In the seat formerly held by Nova Scotian political heavyweight Scott Brison, two untested candidates will square off. Kody Blois is running for the Liberals and Martha MacQuarrie is on the ballot for the Conservatives.

Scott Brison held this seat for so long it’s easy to forget it used to be a reliable seat for the Conservatives. This riding is up for grabs.

This riding see-sawed back and forth between the Liberals and Conservatives for several decades now. The big factor in this seat will be the impact of another former Tory MLA running for the federal Conservatives.

Chris D’Entremont was first elected in 2003 and was then re-elected four times with very healthy margins. During his time as an MLA, he held several cabinet positions. He will be up against Jason Deveau for the Liberal Party. Deveau spent three years working as the executive assistant to Colin Fraser, the former MP, and was a federal policy analyst before that.

Both candidates are from different parts of the riding and within the federal riding there are Liberal and Tory MLAs. This is going to be a hard-fought riding and it will be up for grabs.

It becomes even more important when we consider how many females remain undecided. 32 percent of females were undecided – that’s compared to 19 percent of males. If undecided females break similarly to the decided females, there are a lot more votes available for the Liberals in the province.

Scheer trailed Trudeau for preferred leader by 20 points in Nova Scotia. In fact, there isn’t one demographic group where he led or even tied Trudeau. That will create challenges for his local candidates.

Here are five things to watch in Nova Scotia:

1. Will the NDP be able to campaign and make up ground in HRM?

If they do, that could cause candidates like Samson or Fillmore troubles. At this point, it doesn’t look likely. Campaigns matter, though.

3. Will Fraser hold off Canyon?

This is an important riding for both parties. If the Liberals hold it, it will be their first back-to-back victories in that riding. If the Conservatives win, it means taking back a symbolically important riding.

4. Will women vote for the Liberals?

There are more undecided female voters than male voters. Female voters could decide the fate of Nova Scotia’s MPs.

5. What will Trudeau’s blackface controversy mean?

National polls show that a small percentage of voters are considering changing their vote because of the incident. In this campaign, that could be enough to do real damage.

Our analysis is powered by Atlantic Matters. Atlantic Matters Quarterly Omnibus is a telephone-based public opinion poll that is conducted every three months in Nova Scotia, New Brunswick, Prince Edward Island and Newfoundland and Labrador. If you need accurate information on attitudes in Atlantic Canada, contact our Vice President Stephen Moore